The views and opinions expressed here are solely those of the author and do not necessarily reflect the views of Cointelegraph.com. Every investment and trading move involves risk, you should conduct your own research when making a decision.

The market data is provided by the HitBTC exchange.

Chinese stocks led the way last week for global developed equity markets with the Shanghai Composite Index rising 89.86 or 2.81% to close at 3,289.02. Keep in mind though that Chinese markets were closed till Thursday and this performance reflects only two days of trading due to the Chinese New Year holiday. Regulators announced on Friday, Feb.23, that they would take over Anbang Insurance and the index was still able to advance against the news, a sign of strength.

The remaining six markets tracked in the table below mostly had positive but unexciting performance, while UK’s FTSE 100 index was the one negative market.

In Japan the Nikkei 225 index was the second strongest performing market last week, rising 172.53 or 0.79% to end at 3,289.02. On Friday signs of inflation were reported with the CPI inching up 0.9% in January from a year earlier. The third best performer was the US with the S&P5 500 index gaining 15.08 or 0.55% to wrap up the week at 21,892.78. Downward pressure was seen for most of last week with the S&P 500 trading largely sideways before strength came back by Friday. The index closed strong, at the high for the week and a three-week closing high.

Two weeks ago the bottom trend line of that channel was tested as support, along with the 100-day moving average and 78.6% Fibonacci retracement, and it held, subsequently ending a two-week 13.01% correction. As of last week’s 31,477.90 high the index had bounced 8.06% from that low and retraced at least 50% of the prior decline.

For the past five days, the Hang Seng has been consolidating within a range. Therefore, a move through the bottom of last week’s low at 30,720.50 likely leads to further weakness and a possible test of the recent bottom from three weeks ago. A move through the top points to a continuation of the bounce into the 61.8% Fibonacci retracement at 31,820.50, which would complete a gap fill from the decline at 31,712. This is followed by a price zone from around 32,394.9 to 32,552.10, consisting of the three-week high and 78.6% Fibonacci retracement, respectively. 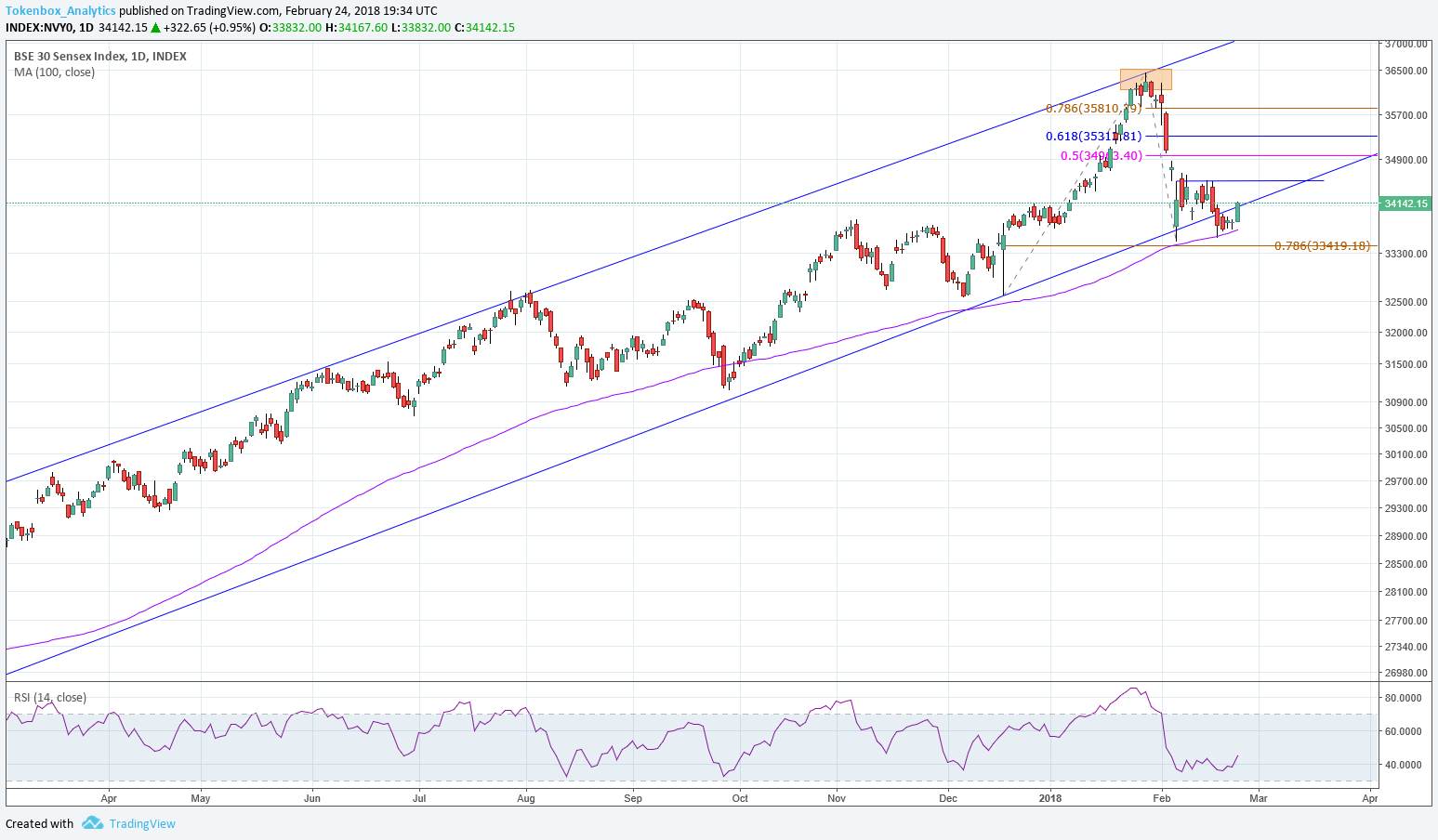 Nevertheless, the bottom developing in this index may be more reliable than what is being exhibited in the other indices as a potential double bottom trend reversal pattern has formed. The three-week low was tested as support with last week’s 33,554.37 low and the index bounced from there to close near the high for the week. This is short-term bullish behavior, and it is occurring at a strong support zone given the confluence of indicators noted in the paragraph above. A breakout of the double bottom occurs on the move above 34,535.

Cryptocurrencies: All weaken together

Leading cryptocurrencies were weak across the board last week and clearly underperformed equity markets. Regardless, the moves were mild historically. It is interesting to note that some of the top cryptocurrencies remain correlated as to direction. In other words, since moving into corrective mode from record highs, they have been generally moving up and down, of course to different degrees, somewhat together.

We will continue to watch the evolving relationships in the coming weeks for signs of a leading index and divergence. Further short-term weakness would not be surprising in the coming week or two as cryptocurrencies continue to sort out a sustainable bottom. So far the recoveries have been V-shaped and are not as reliable as consolidation bottoms of some sort.

IOTA was the worst performer last week, falling $0.39 or 18.4% to close at $1.71. Two weeks ago the IOT/USD pair broke out of a bullish descending wedge pattern, and last week it pulled back towards the top downtrend line of the pattern to test it as support. That process has not yet completed as a short-term downtrend (7-days) remains. Therefore, the expectation is for the cryptocurrency to turn back up once the pullback is complete. 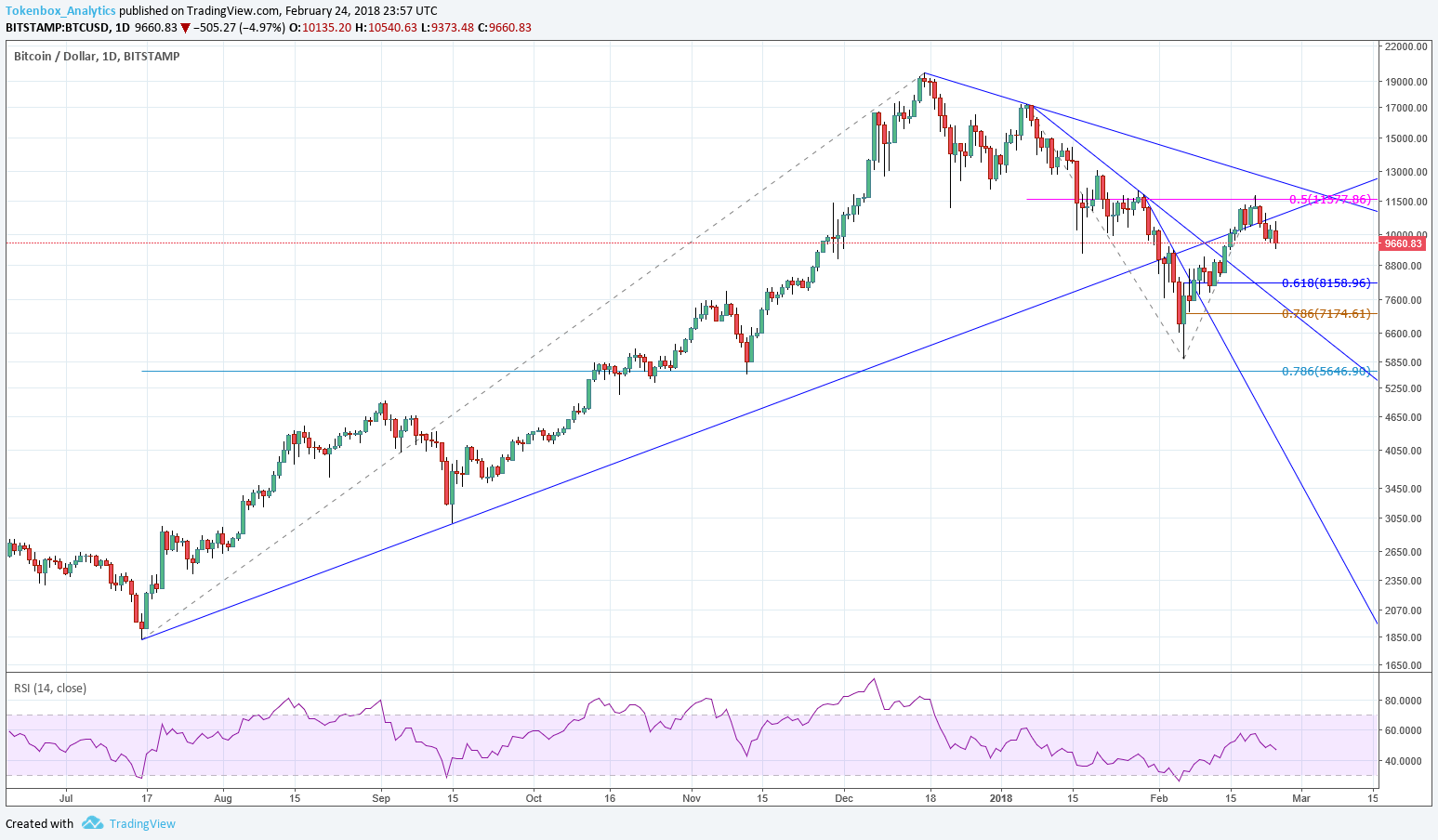 Since hitting last week’s high Bitcoin has been pulling back. Next watch for support to be found that can turn the cryptocurrency back up for a second leg up off the $5,920 bottom and possibly get above last week’s high. The 61.8% Fibonacci retracement is at $8,158.96, and the 78.6% retracement is at $7,174.61. Watch for support to be seen at either of these price areas. 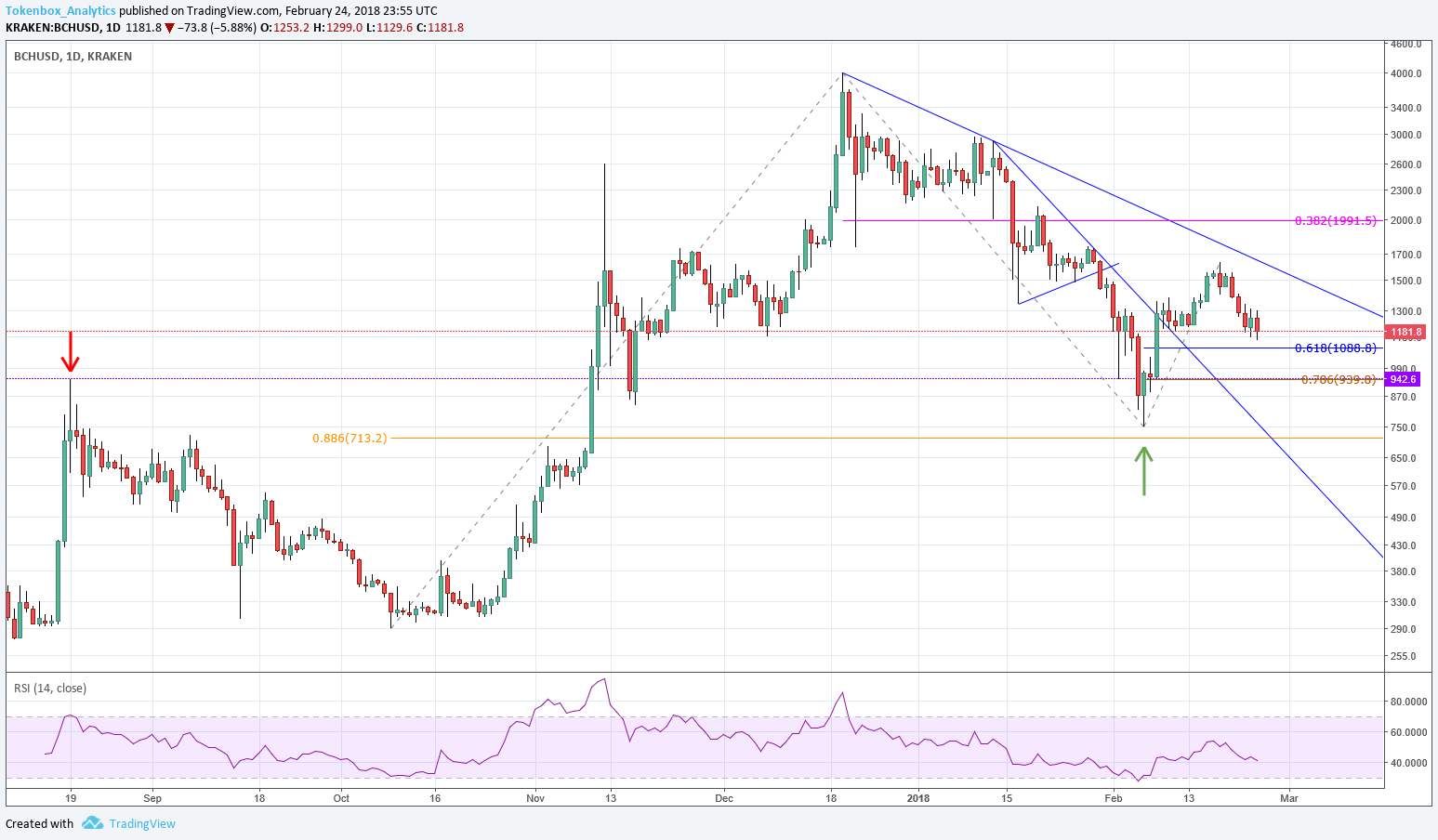 The market data is provided by the HitBTC exchange; the charts for the analysis are provided by TradingView.

Bitcoin price needs to close above $29,450 for its first green weekly candle since March

March 11, 2018 admin
[ad_1] The views and opinions expressed here are solely those of the author and do not necessarily reflect the views
BUY/SELL