It has been an interesting time for Facebook and its relationship with cryptocurrencies ever since they made a precedent setting move to ban adverts on their platform that had anything to do with cryptocurrency in January this year.

The social media giant has since updated their policies to once again allow cryptocurrencies to advertise on Facebook, although it has continued its ban on ICOs. This move is being seen as a positive for the cryptocurrency space, which has earned back a major advertising platform on which it can reach a large number of users.

However, behind the scenes, all is not as it seems as cryptocurrency-related content continues to get caught in the web.

On January 30, it was announced that Facebook would be updating its advertising policy prohibiting ads that use “misleading or deceptive promotional practices,” this includes ads of cryptocurrencies and ICOs.

Even back then, the message from the social media giant was confusing, as the decision by Facebook came just after its founder and CEO Mark Zuckerberg said in a personal post that he had a desire to study cryptocurrencies further:

“There are important counter-trends to this — like encryption and cryptocurrency — that take power from centralized systems and put it back into people’s hands […] I’m interested to go deeper and study the positive and negative aspects of these technologies, and how best to use them in our services.”

The post announcing the ban did mention that the policies would be revisited later down the line, and that it began as ‘intentionally broad,’ however, this direct U-turn has come as quite a surprising move from Facebook, even if it is only currently being paid in lip service. 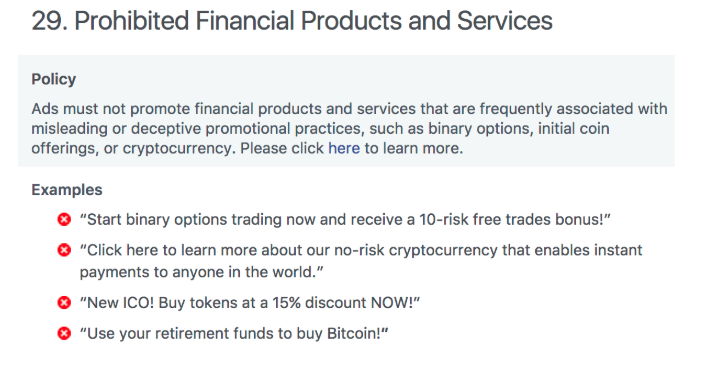 The move from Facebook opened the floodgates for other such social and internet platforms to follow on and also ban anything crypto-related.

Twitter then followed suit, confirming long-standing rumours that it would also stop all forms of cryptocurrency advertising. Twitter blocked out ICOs and other token sales, as well as advertisements for exchanges and wallet services, unless they were public companies and listed on major stock exchanges.

The announcement of the Facebook ban, in January, saw Bitcoin drop, as it went from $11,200 to $8,800 over a few days after it was announced. 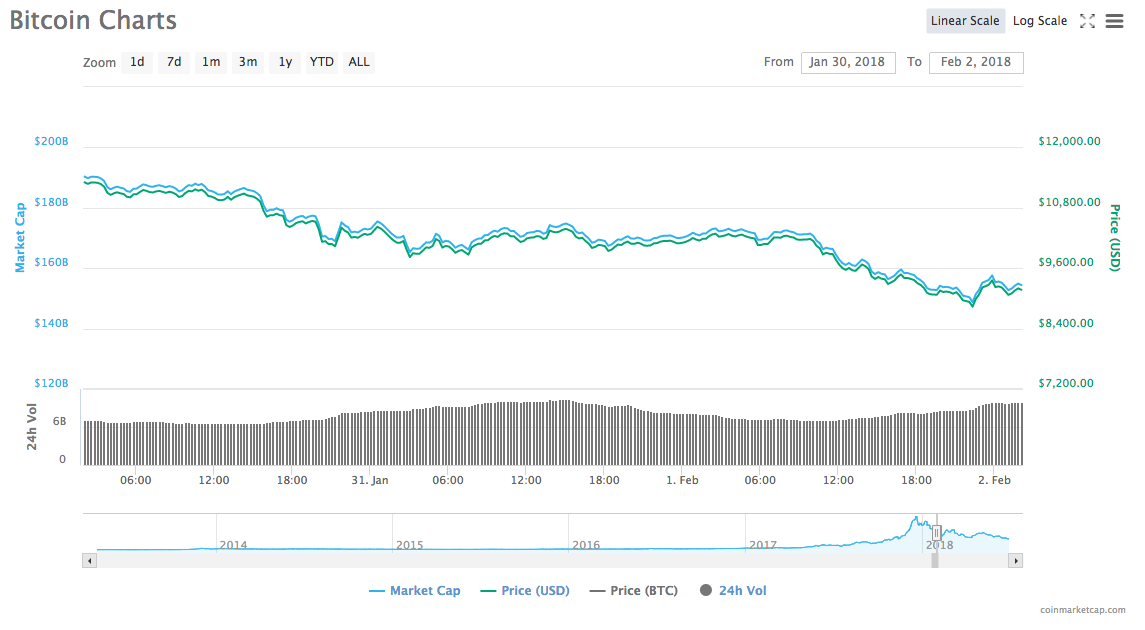 Bitcoin fell below the $8,000 mark in March on the news, and Ethereum went under $600 when Twitter and Google announced their bans. 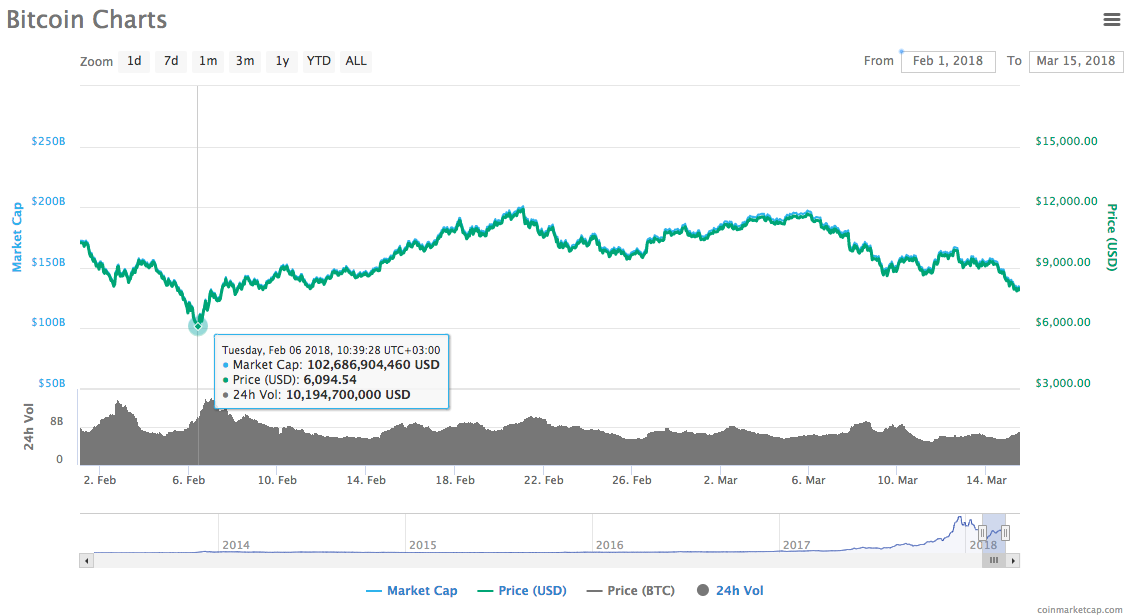 On June 26, the same policies were again updated and Facebook announced that it would allow cryptocurrencies to be advertised again, but ICOs would remain banned. The company stated that it had been looking at the best way of refining its blanket ban on cryptocurrency adverts.

The interesting wording there is that Facebook is looking to allow content from ‘pre-approved advertisers’ and so it cedes that, “not everyone who wants to advertise will be able to do so.”

While Facebook says one thing about its cryptocurrency policy, it seems as if it is doing something entirely different. The social media giant has had a confusing relationship with the ecosystem with news that it would be exploring blockchain, potentially for a messenger-style app as it was led up by David Marcus, the head of Facebook’s messaging app, Messenger.

More recently, there have been reports in the media that Facebook is looking at launching its own cryptocurrency, a sort of in-app virtual coin.

The reason behind Facebook’s turn around in its stance on advertising has not really been explained, especially considering it set the precedent with the ban in the first place. But with its own work in blockchain and potentially cryptocurrency as well, an ad ban would not be of benefit to the company.

Building a space for itself?

The fact that there is evidence of Facebook entering the blockchain and cryptocurrency market means that there is a lot at stake for the social media giant, especially in a space that is revolutionary and will definitely be important in the future.

By creating an ecosystem that is friendly to projects it backs, or is involved in, it could — if it wanted to — help boost them ahead of others. And with this centralized control, they have a lot of sway over which crypto projects get sufficient Facebook marketing.

Carlos Grenoir, CEO of Olyseum — a blockchain social sports app — sees how Facebook’s reversal of the ban could be selfishly motivated:

“The reasons for Facebook reversing its decision to ban crypto ads are not clear, but the motivation could have something to do with its own strategy regarding the evolving crypto space. The cryptocurrency ecosystem is expanding rapidly, and is growing its footprint in mainstream society, introducing new economic opportunities. We are also seeing regulatory authorities taking steps to provide security to the ecosystem that will in turn give strength to the global economy.”

Not all the news of Facebook’s reversal was seen in such skeptical light, as some in the crypto community ticked this move as a big win for the longevity and advancement of cryptocurrency.

Things are warming up…

This is good “regulation”. Good ICOs should not need advertising! https://t.co/Cl9LMW2wlj

However, Bitcoin commentator WhalePanda, raises an interesting point about Facebook’s current state of affairs and their need to do something revolutionary to keep relevant.

Desperate times for Facebook, with decline in user growth ad revenue also went down… So now they#39;re reversing the ban to make some money again. https://t.co/wILU6uUHw3

Already having an impact?

Cointelegraph, as a media outlet that operates in the cryptocurrency space, is a company that falls under the gambit of the initial ban and felt the effects of the ban when it would try and boost articles relating to cryptocurrency matters.

The posts which have been put forward for review by Cointelegraph have become stuck, and are not being confirmed, nor denied by Facebook, during the ban as well as after the ban was ‘reversed.’

The only response that Cointelegraph has seen from Facebook in terms of confirming or denying posts during the ban has to do with an article on John McAfee announcing his bid to run for U.S. president it deemed to be political, and thus against its terms. So, according to the Facebook terms, should all media posts covering runners for presidency be denied?

After yesterday news of Facebook reversing its ban on cryptocurrency advertisements, Cointelegraph has still been experiencing the same stringent approach on content monitoring when trying to promote this news, only for the post to be left stranded and unboosted with no explanation or reason. 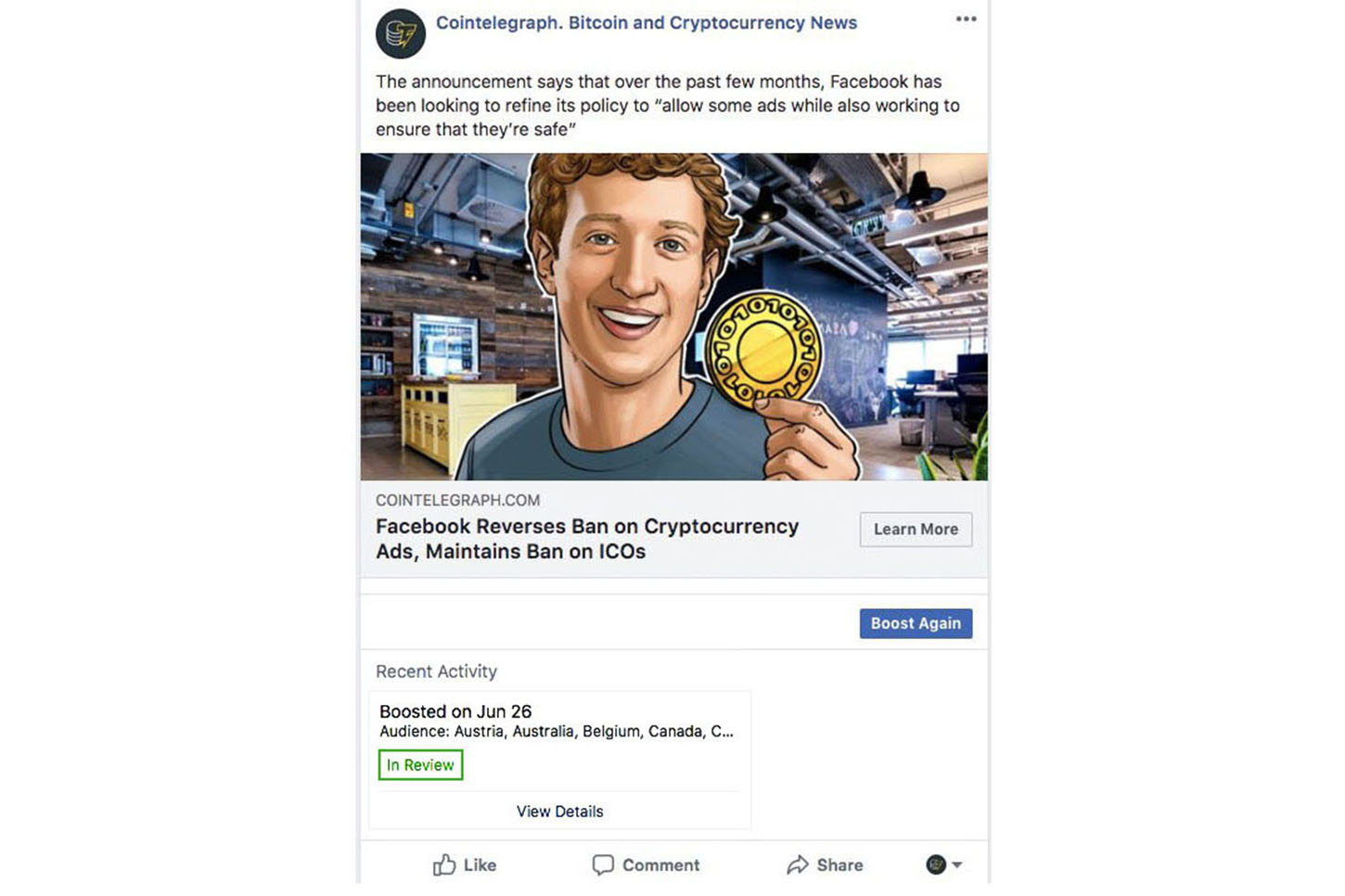 It is a confusing space that Facebook has currently created for those in the cryptocurrency space. Cointelegraph is having its articles left in limbo, with no reason or explanation, as Facebook announces the ban on such material is no longer in action.

If Facebook is indeed vetting those who are involved in the cryptocurrency space, it is yet to be explained, and if this is indeed the way in which the platform hopes to move forward, it could risk bringing a huge undertaking upon itself.

Facebook has come forward and said one thing, but they have not acted how they have said they would. Their decision to change policy has been explained broadly and without much direction, only stating that they have tightened up their broad brush strokes from January.

While the reversal of the ban will be seen as positive from most of the cryptocurrency community, it needs to be investigated further, as it has not been enacted in the manner in which it has been stated.

If Facebook is reopening the gates for cryptocurrencies, it needs to be done so unequivocally, fairly and immediately. If they, however, are using this as a way to vet certain projects and helped their own means, they should be questioned and pushed further.

What Went On at US Congress Crypto Hearings

June 22, 2018 admin
[ad_1] Major sporting events always attract a massive amount of attention across the world and it is encouraging to see
REVIEWS

April 28, 2022 admin
[ad_1] Having supported Zug’s Crypto Valley in the early days and founded Crypto Oasis in Dubai to serve as blockchain