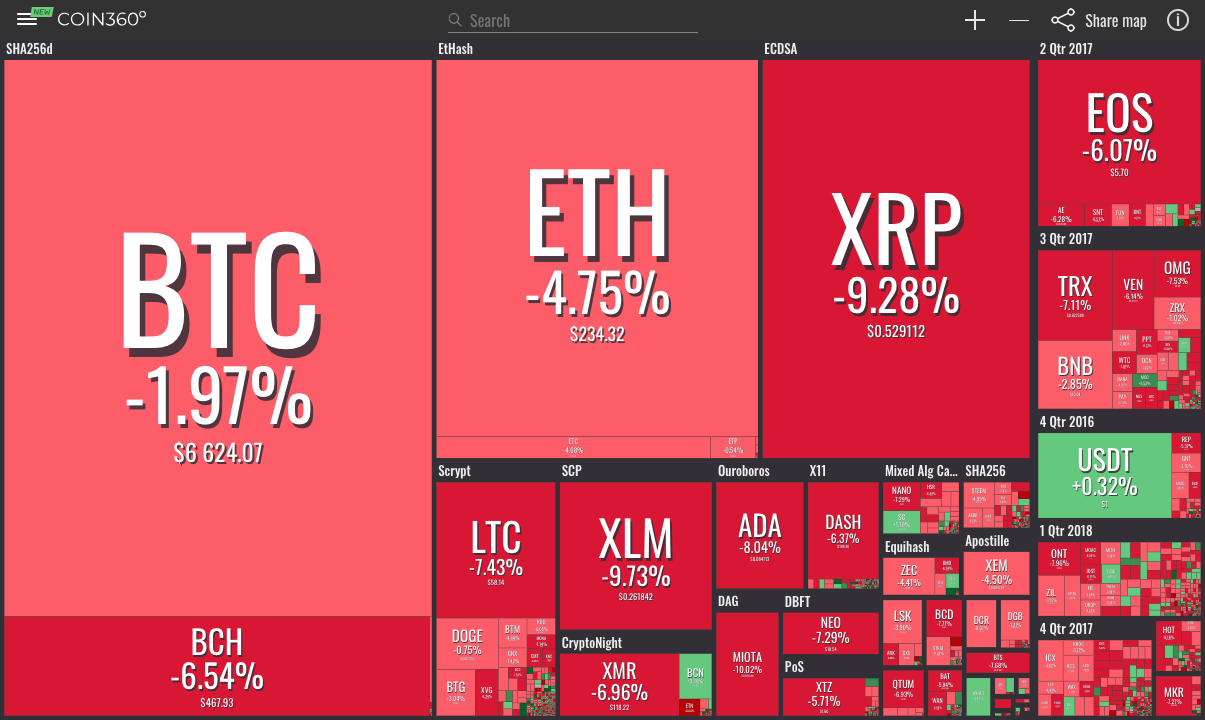 While Ethereum has now reclaimed its long-standing spot as second-largest coin by market cap on CoinMarketCap — which it briefly ceded to a skyrocketing Ripple on September 21 — Ethereum has today seen around a 5 percent loss on the day to trade at $234 to press time.

Following its intraweek high of around $250 on September 22, the altcoin has seen depressed growth to jaggedly trade sideways between $240-245, before taking a further dip in the hours before press time.

On the week, Ethereum’s gains remain up by over 6 percent; monthly losses are around 15 percent. 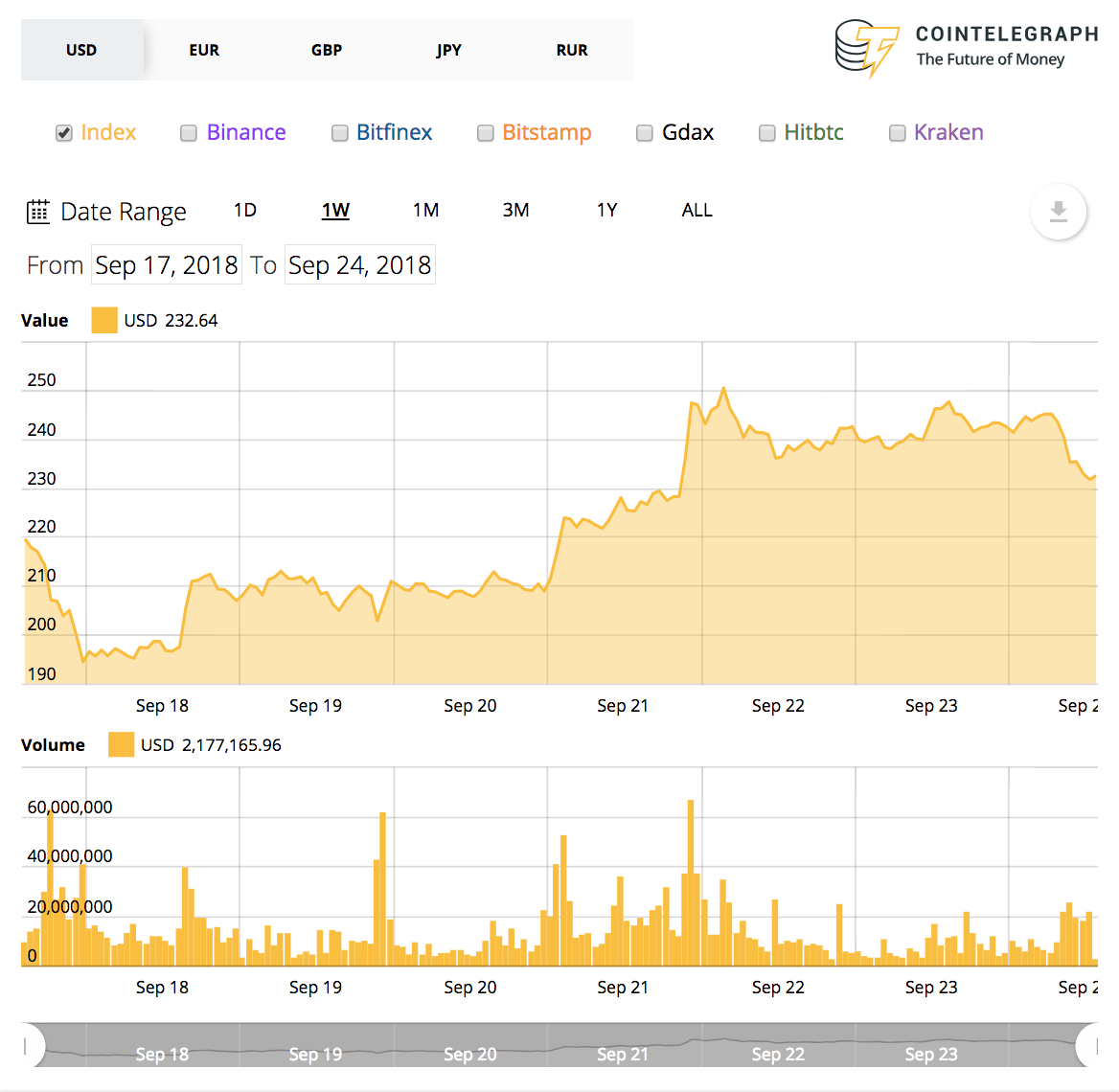 Ripple (XRP) has had a record-breaking week, with its unprecedented eclipse of Ethereum on September 21 to seal a new ranking on CoinMarketCap as second-largest crypto in the entire market. The asset’s market cap had hit around $23 billion.

Nonetheless, Ripple’s gains have since tapered off somewhat. The asset is today down around 10 percent over a 24 hour period, and is trading around $0.52 at press time.

Last week notably also saw hints that Ripple is likely to launch a commercial application of its xRapid liquidity solution for banks “in the next month or so.”

On the week, Ripple is up 87 percent, bringing its monthly gains to around 61.5 percent. 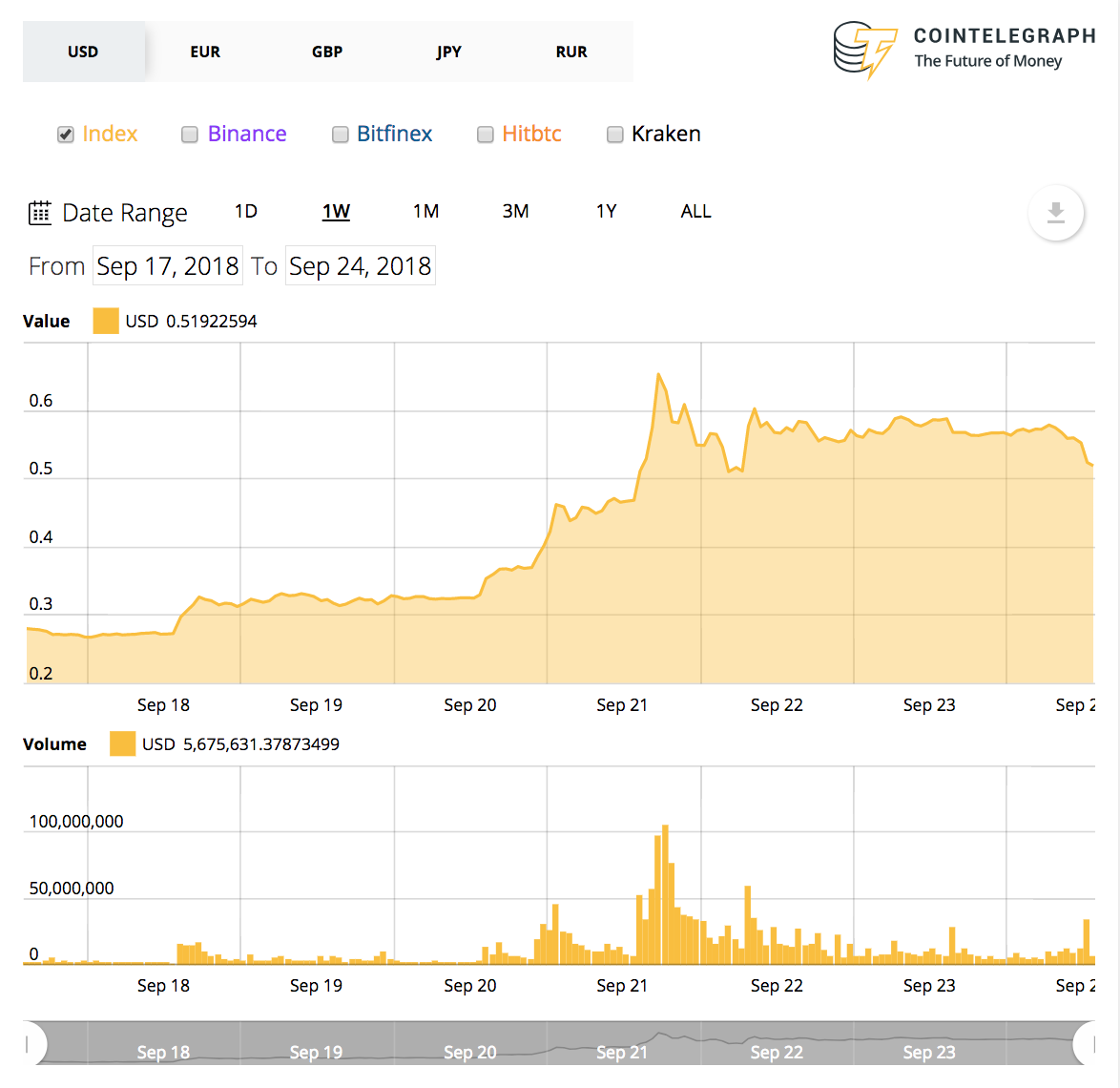 Bitcoin (BTC) has seen less growth this week as well as milder losses today. The top crypto is down around 2 percent to trade around $6,613 as of press time.

Bitcoin’s relative stability is shown on both its weekly and monthly charts: on the week, the asset is up 1.7 percent, and is around 1 percent in the green on the month. 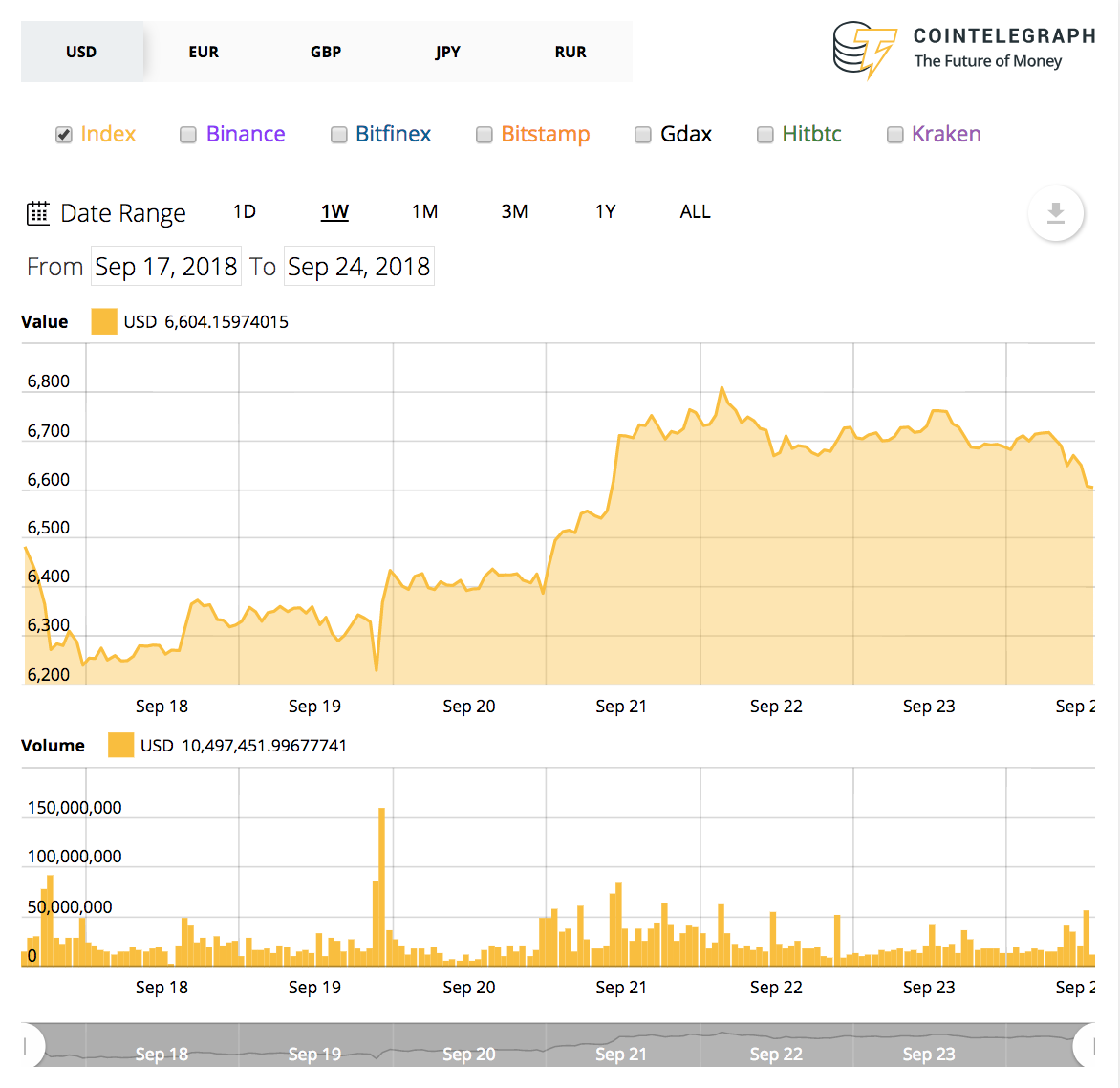 Among the top ten coins listed on CoinMarketCap, Stellar (XLM) has been hit with the most severe losses on the day, down 9.7 percent to trade at $0.26 at press time. Cardano (ADA), is also down a weighty 8 percent and is trading around $0.084.

All of the other top twenty coins are in the red, with IOTA (MIOTA) down 10 percent to trade at $0.56. Tron (TRX) is down 7 percent at around $0.022. Dogecoin (DOGE), down less than 1 percent on the day, is the most resilient alt among all the top twenty largest cryptos.

Total market capitalization is around $219 billion as of press time, down around $10 billion from its intraweek high of close to $229 billion. 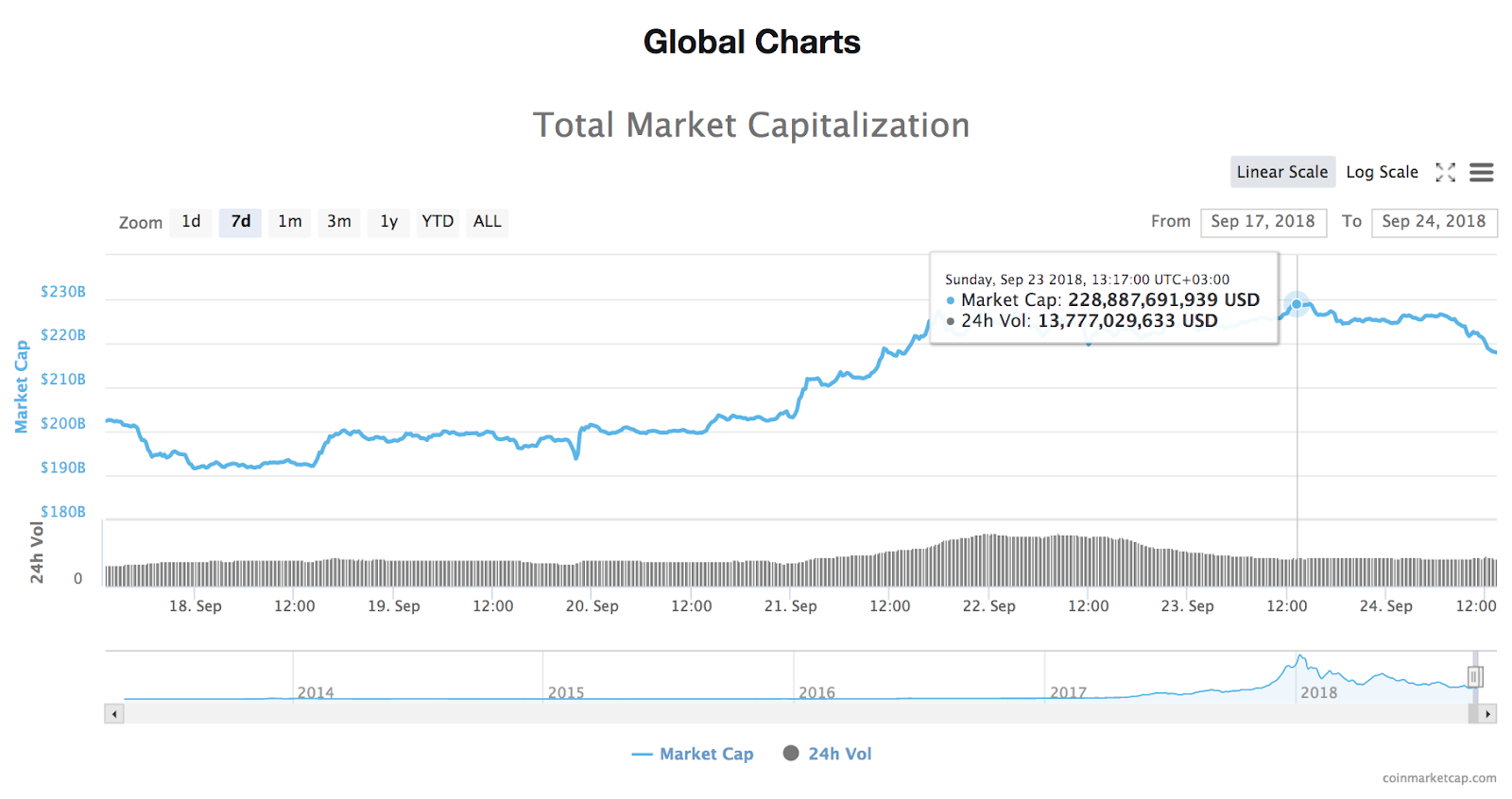 What Are the Big Crypto Legal Cases to Watch in 2022?

January 2, 2022 admin
[ad_1] Reading Time: 2 minutes From Craig Wright to Tether, there have been some huge crypto legal cases this year
ALTCOIN

September 17, 2018 admin
[ad_1] The views and opinions expressed here are solely those of the author and do not necessarily reflect the views
ALTCOIN

Decentralized Application: What is it?

November 2, 2017 admin
[ad_1] Every single person that uses the internet today, does not have primary control of the data they share on