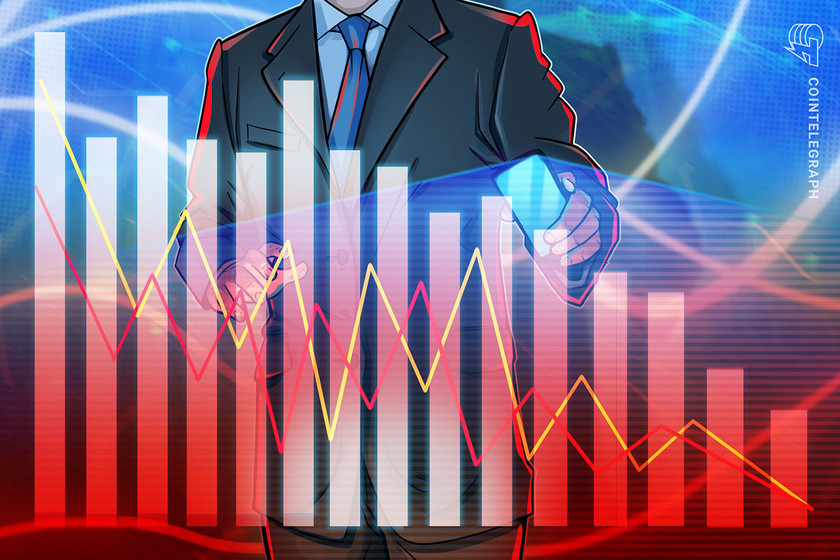 According to price data from CoinGecko compiled by CoinGoLive, the current bear market has seen a whopping 72 out of top-100 tokens fall more than 90% from their all-time highs.

The larger cap coins are faring better than most. Among the top ten cryptocurrencies by market cap, nine have dipped less than 90% during the current market downturn. Bitcoin (BTC), the largest crypto, is down 70.3% from its November high of $69,000. Second place is Ether (ETH) which is down 78% from its high of $4,878.

Others in the top ten include Binance Coin (BNB), Cardano (ADA), Solana (SOL), and Polkadot (DOT) which are down between 68% and 88%, (excluding the three stablecoins USDT, USDC and BUSD). Ripple (XRP) is the exception, tracking a fall of 90.56% from its ATH.

Exchange tokens appear to be doing better than many other sectors with a 68.3% average fall from their ATHs.

The best performer there is LEO token, which has only fallen 38.87%, which Cointelegraph reported saw “aggressive buying at lower levels” on June 13. LEO is the Ethereum-based utility token for the Bitfinex exchange and trading platforms managed by iFinex and is used to reduce fees for traders.

Coinflex exchange’s native FLEX token is the 83rd largest crypto. It also appears relatively immune to the devastating drawback and is down just 38.6% from from ATH. FLEX is used to pay for transactions and reduce trading fees on its trading platform. The project touts its token burning mechanism as a reason for its price resilience.

The utility token for the KuCoin trading platform, KCS, has seen a 61.43% drawdown from its ATH. KCS is an ERC-20 token that is used to reduce fees on the exchange and is the native token for KuChain, a blockchain developed by the exchange.

However KCS could see a further dip more than 60% below its ATH if Cointelegraph’s June 12 predictions are right.

Related: Bitcoin bounces 8% from lows amid warning BTC price bottom ‘shouldn’t be like that’

BTC is currently trading at $20,486 since the Federal Reserve announced a 75 basis point hike in interest rates to try to combat inflation.

As an aside, stablecoins haven’t been immune to falls either, despite theoretically being stable. Since 2018, many have wobbled by 10% to 30% at various points including USDT, USDC, BUSD, DAI, FRAX, USDP, PAXG, CDAI and XAUT. TUSD recorded a 38.4% deviation from its peg in 2018.

July 3, 2022 admin
[ad_1] The past few weeks have been interesting and have surfaced what we in the financial services industry call matters
Business

July 25, 2022 admin
[ad_1] Tesla’s decision to offload most of its Bitcoin (BTC) treasuries netted the company a hefty profit in the second