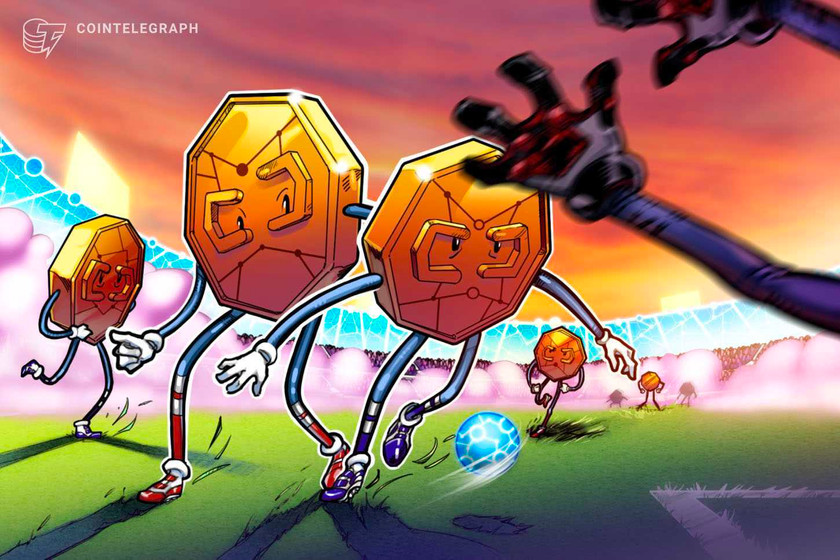 Crypto exchange OKX has announced that it has made a deal with English Premier League (EPL) champions Manchester City to become the team’s training kit sponsor for the 2022-23 season.

The OKX deal will put a fair amount of eyeballs on company branding, given that Manchester City won the EPL last season and is looking primed to make another tilt at the league this upcoming season after signing the Norwegian star striker Erling Haaland.

As part of the deal, OKX’s logo will feature on both the men’s and the women’s training gear until mid-2023, with current previews showing OKX’s name on the front of training shirts in the lower chest area.

Additionally, OKX stated that it had commissioned popular street artist “Akse P19” and the Global Street Art Agency to create four artworks across Manchester that include QR codes. These can be scanned by fans for a chance to win season tickets in the OKX Hospitality Box. The street art pieces depict players such as Haaland, Jack Grealish, João Cancelo, and John Stones.

The duo has held a partnership since March after OKX was signed on to become Manchester City’s Official Cryptocurrency Exchange Partner. They have also touted that more Web3-focused fan engagement experiences will be rolled out.

OKX was founded in 2017 and is based in the Republic of Seychelles. The firm claims to have more than 20 million customers across the globe from around 180 international markets. It supports trading on top assets such as Bitcoin (BTC), Ether (ETH), Polkadot (DOT), and Cardano (ADA).

Related: Manchester City to build Etihad Stadium in the metaverse

The most recent crypto deal that precedes Manchester City’s is Everton’s deal with Stake, which was announced on June 9. The multi-year agreement is said to be worth roughly $12 million a season, marking the club’s “highest front-of-shirt deal in the club’s 144-year history,” according to a statement from Everton. Stake also held a sponsorship deal with Watford F.C. last season, who will be plying their trade in the second tier of pro-English football after being relegated.

This week, French Ligue 1 champions Paris Saint-Germain F.C. (PSG) also announced a crypto-related move, with the team rolling out NFT tickets for its pre-season tour of Japan later this month.

To commemorate PSG’s first trip to Japan since 1995, the team is offering three premier NFT tickets that offer buyers VIP access to games, meet and greets, player autographs, and private parties with a select group of players who were not specified.

The NFTs are on sale until Wednesday, and to obtain all of those supposed benefits, the buyer will have to pay a hefty 180.36 ETH, worth around $207,000 at current prices.

Crypto Markets See Mix of Red and Green, With Half of Top 100 Coins Slightly Up

September 30, 2018 admin
[ad_1] Sunday, September 30: crypto markets are seeing a mix of red and green today. A little more than half
Business

September 27, 2018 admin
[ad_1] South and North Korea may be separated by a border that's only 2.5 miles wide, but the two nations